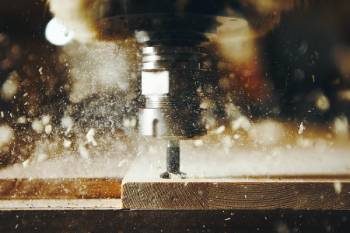 Computer numerical control – or CNC – is quite a modern concept in the production and manufacturing industries. It is a manufacturing process that involves pre-programmed computer software that dictates the machinery and the movement of factory tools. While it’s a relatively new concept, it’s one that goes back to the idea of numerical control.

Numerical control began when concepts of programmable logic were incorporated with machine tool automation. Numerical control machines were initially built in the 1940s, but by the 1950s, machines that held a slight advantage were then produced. They were created as a way to move the controls of the machine, following specific instructions that were fed on punched tape into the machine. Over time, digital and analog computers improved these mechanisms, and the introduction of technology into the idea of numerical control is what has led us to CNC today.

It wasn’t until after World War II that John Parsons researched ways to improve how aircraft were controlled. He started with the creation of stiffened skins for them, and what followed was a range of Air Force research projects at MIT. The research led to the invention of the experimental milling machine.

Before the MIT projects began, Parsons Corporation developed a system to create templates for helicopter blades. Parsons had discovered how to calculate airfoil coordinates, and he fed these data points into a Swiss jig borer. This was considered to be the very first numerical control machine as it could manufacture goods with fed punched cards into the system. The system then read and produced the correct parts based on information that had been pre-programmed into the machine.

Over the 1960s and 1970s, numerical control technology advanced into the creation of a CNC machine that most people would see and know today. The processes for automation began with digital technology, with production processes becoming far more efficient than they ever had been before. Now, most people can buy their own CNC machinery as they please, and it’s more common to find CNC machines across all industries now. Woodworking is one such industry where CNC machinery is exceptionally common!

There is a lot to be said for CNC machinery, and as the technology evolves over time, there is likely to be even more elements added. With the future being in robotics, it’ll be exciting to see how it works with CNC machinery and automation!